Read about the driving and traffic laws, the fines' system and the initiatives for enhancing road safety in the UAE. Also find links to pay fines online and latest statistics on deaths and injuries from road traffic accidents.

You can report minor accidents online via:

Check and pay fines relating to private vehicles and driving licences. Check on the platforms of:

The UAE’s amended federal traffic law came into effect on 1 July 2017. The new regulations aim to further protect the lives of road users and reduce traffic casualties from about 6 per 100,000 people to 3 per 100,000 as per Vision 2021.

Ministerial Resolution No. 177 of 2017 regarding issuing and renewing a driver’s licence

The resolution sets stipulations for issuing and renewing drivers’ licences as the following:

For those who are 21 years of age and above

For those below 21 years of age

Ministerial Resolution No. 178 of 2017 regarding traffic control rules

The resolution covers many safety and control aspects. Some of them are:

Mandatory seat belts for all

Driving under the influence

Drivers caught under the influence of drugs and or alcohol will have their licence suspended for one year, starting from the day of the verdict. Court will decide the fine and/or jail term.

Motorcycle riders and motorists who ignore traffic lights will be fined AED 1, 000 and incur a penalty of 12 points and their vehicles will be seized for a month.

Using phones while driving or any other distractions will be attract AED 400 fine and four black points.

Those exceeding the speed limit by 80 kmph will be fined AED 3,000,  slapped with 23 black points and have their car impounded for 60 days.

In an attempt to prevent road accidents and reduce its impact on lives and properties, different government entities in the UAE have launched initiatives and awareness campaigns to lessen the impact of traffic fatalities. Some of these initiatives are:

The Traffic and Patrols Directorate in Abu Dhabi has launched a road safety management plan, which aims at decreasing traffic accidents' fatalities to 3 per cent per 100,000 inhabitants by 2021. Measures to improve road safety encompass the framework frequently applied in accident prevention work, which contains four elements:

DoT of Abu Dhabi introduced a road safety audit (PDF, 150 KB) to be completed for all new highway projects; this audit would cover the phases of design, construction and post-construction. The purpose of the audit is to identify road safety problems and to suggest measures to eliminate or mitigate any concerns.

Road safety awareness was a programme launched by DOT of Abu Dhabi, which focuses on drivers, riders and pedestrians. The programme targets educating children and adolescents as future road users and drivers.

Speed management strategy of the emirate of Abu Dhabi

RTA launched its strategic plan 2014-2018 (PDF, 100 KB)  to act as a major support to the overall development drive in the UAE and the emirate of Dubai, as well as being a driving force to improve performance that contributes to serving the country, its citizens and residents.

The strategy has eight goals:

Dubai traffic safety strategy is set to establish a challenging record of reducing fatalities to 1.5 for every 100,000 of the population in Dubai by 2021.

The strategy is based on four agendas:

In 2008, Roads and Transport Authority (RTA) launched a major safety campaign that will go for life under the slogan Haseb (take care in Arabic). The campaign highlights safety issues on roads, in transportation, at construction sites, at sea and other safety behaviours.

Based on accident statistics of 2007, the campaign recognises seven key causes of road accidents, which include excessive speeding, use of handheld mobile phones, fatigue, not keeping enough distances between vehicles, not wearing seatbelts, lack of lane discipline and jumping red signals.

In 2012, Dubai Police introduced the ‘White Points’ system to motivate those driving cars to abide by traffic laws and regulations. Under the White Points system, people with a driving licence issued by the Dubai Government will be rewarded if they do not:

White points are accumulated at the end of the year, at the rate of two points per month. Eligible drivers would gather 24 points in one calendar year.

White points entitles the driver to one of the following rewards, once, during one calendar year:

Telecommunications and Digital Government Regulatory Authority (TDRA) in cooperation with Abu Dhabi and Dubai Police launched an eCall system for automatic call in the event of traffic accidents.

In the event of a collision, the eCall system automatically establishes a two-way voice communication via the cellular network to the nearest emergency centre. The emergency centre will dispatch a medical team to the location of the accident as soon as possible.

This system will accelerate the accident response time by providing a sophisticated feature for rapid communication with the emergency teams, which allows automatic and voice information to be received and logged into the system simultaneously rather than printing commands in a conventional manner.

In the UAE, road injuries are one of the leading causes of death for children. Two out of every three fatally injured children die due to road traffic crashes.

The Executive Regulations of Federal Law No. 9  for the year 2011 concerning Land Transport states that land transport activity may not be practised before obtaining a licence from the respective authority.

Traffic police and road and transport authorities across the UAE play a major role in ensuring safety and traffic regulations and use smart technology to minimise traffic violations.

The UAE applies Federal Traffic Law No. 21 of 1995, as amended by Federal Law No. 12 of 2007 and the related executive regulations and ministerial resolutions in all aspects concerning traffic controls and violations in UAE.

It is mandatory to adhere to the speed limits set on highways, internal streets, and residential areas.

The UAE has a zero-tolerance policy in place regarding driving under the influence of alcohol. This act is punishable by law.

Talking on cell phone while driving is prohibited, as it may distract the driver and lead to serious accidents.

The UAE has a system of black points leading to confiscation of the driver's licence is in force to ensure adherence to traffic laws.

The system is based on a number of fixed points. The driver who violates traffic rules gets black points according to a specified schedule. The number of black points corresponds with the seriousness of the violation and it is counted from the date of violation.

For more information, refer to the Black points' law.

The latest data available on the UAE’s data portal Bayanat.ae shows that traffic accidents in 2016 caused 725 deaths and 6,681 causalities. As per the National Agenda 2021, the UAE’s Ministry of Interior and local traffic departments are working to reduce the rate of road traffic death per 100 thousand people.

In 2017, the number of deaths caused due to road accidents decreased to 525. In 2018, the rate of road traffic death decreased to 3.83 per 100 thousand people. The Traffic and Patrols Directorate in Abu Dhabi launched a road safety management plan, which aims at decreasing fatalities from traffic accidents to 3 per 100,000 inhabitants by 2021. 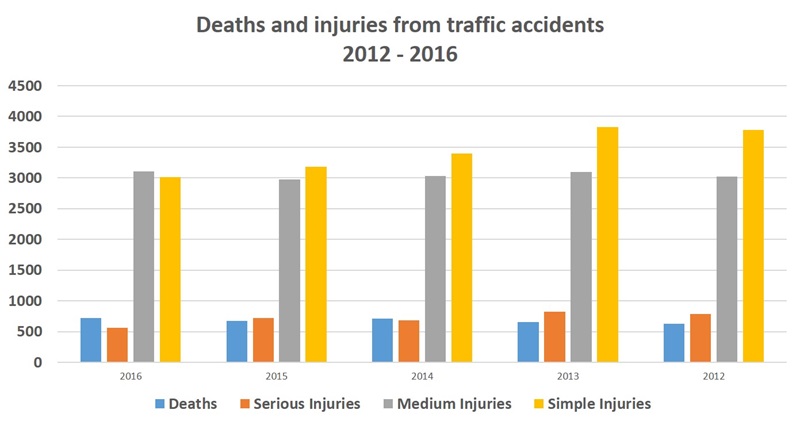