Paying wages on the due date is the responsibility of every employer. Private sector employers should ensure to pay their staff’s salaries through the Wages Protection System to avoid penalties and fines.

For any concerns or complaints regarding the unpaid or delayed salaries, employees may contact Ministry of Human Resources and Emiratisation (MoHRE) or register a labour complaint.

When should employers pay salaries?

The employee's wages are due from the first day of the month following the expiry of the period for which the wages are specified in the employment contract.

If the period is not specified in the employment contract, the employee must be paid at least once a month.

The employer is in default of paying the wage if he does not pay it within the first 15 days after the due date, unless a shorter period has been agreed in the employment contract.

There is no minimum salary stipulated in the UAE Labour Law, however it broadly mentions that salaries must cover basic needs of the employees.

How salaries should be paid?

All employers registered with Ministry of Human Resources and Emiratisation (MoHRE) must subscribe to the ‘Wages Protection System (WPS)’ and pay the wages to their employees through it, as per the due dates.

Under this system, salaries of employees will be transferred to their accounts in banks or financial institutions, which are authorised by Central Bank of the UAE to provide the service.

MoHRE does not process any transactions or deal with the owners of the companies that are not registered with the WPS until they register in the system.

Payment can be in Emirati Dirham, the national currency of the UAE or in any other currency, if it is agreed upon between both parties in the employment contract.

The table below lists penalties for companies failing to pay wages on the due dates: 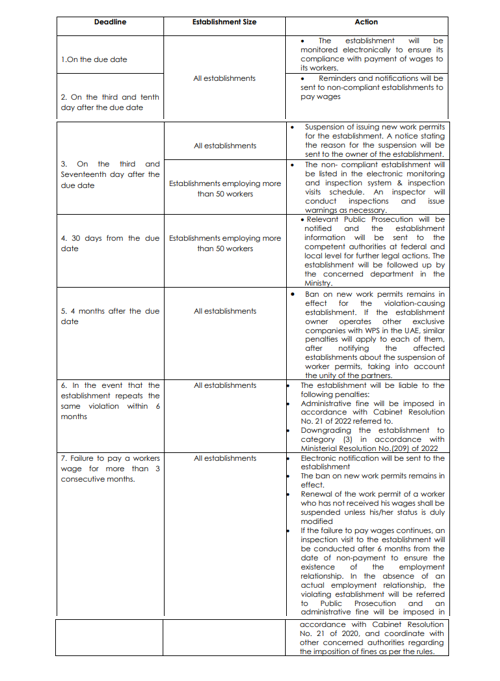 The following categories of employees are excluded from the WPS:

Additionally, the following categories of employers are excluded from the WPS compliance:

Updated on 19 Oct 2022
Next topic Gender equality in the workplace
Prev topic Insurance system for workers in the ...
View all services
(success)