The Emirati Dirham is the official currency of the UAE, abbreviated officially as AED. Unofficial abbreviations include Dh and Dhs. The dirham is subdivided into 100 fils.

History of the UAE Dirham

The ‘Currency Board’ was established as per Union Law No. 2 of 1973, which was replaced by Law No. 10 of 1980 concerning the Central Bank, Monetary System and Organization of Banking (PDF, 550 KB).

The Currency Board issued the national currency that replaced the Bahraini Dinar and the Qatari and Dubai Riyal currencies that were in use at the time as per the website of the UAE Central Bank. The UAE dirham was introduced  in circulation for the first time on 19 May 1973. The Qatar and Dubai riyal were in circulation since 1966 in all of the emirates except Abu Dhabi, where the dirham replaced the Bahraini dinar. 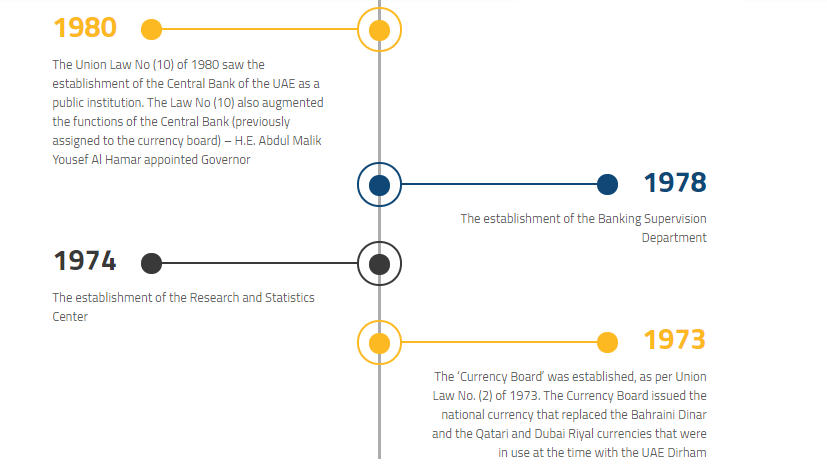 Coins are in the denominations of AED 1, 50 fils and 25 fils. The coins of 1, 5 and 10 fils are not used in everyday life. So, all amounts are rounded up or down to the nearest multiples of 25 fils.

The first dirham notes, introduced in 1973, were in denominations of AED 1, 5, 10, 50 and 100. Three years later the AED 1,000 note was released. The first notes issued had both Arabic and English lettering, with various landmarks of the UAE printed on them. They were similar to those that are in circulation today. Explore more about the UAE’s currency in the Currency Museum and the tourist guide training and licensing manual issued by Abu Dhabi Department of Culture and Tourism.

The Central Bank of the United Arab Emirates issues the country's banknotes. To combat counterfeiting, a watermark of the national emblem appears on the obverse of each note.

Watch this video on how a banknote is protected against counterfeiting in the UAE.

Alongside currency used for everyday transactions, the CBUAE also mints commemorative coins to celebrate the many highlights and achievements of the United Arab Emirates.

Government entities, banks and the CBUAE are all entitled to request CBUAE to issue a commemorative gold, silver or circulation coin to mark an important occasion.

Read more about currency and coins.

The UAE national currency carries the name and emblem of the UAE; hence the moral value is greater than its material value, and any behavior that is deemed an insult to the currency, is a crime punishable by the UAE law.

The Public Prosecution affirmed that according to Article 141 of Federal Law No. 14 of 2018 Regarding the Central Bank and Organization of Financial Institutions and Activities, whoever publicly and intentionally mutilates, destroys or tears up currency, shall be punished by a fine of one thousand Dirham (AED 1,000) or 10 times the value of the mutilated, destroyed or torn currency, whichever is higher.

The Public Prosecution clarified that the UAE laws and legislations have criminalized all practices and acts that violate public morals or underestimate the emblem of the state along with its national currency. According to Article 176 (bis) of the Penal Code Federal, anyone who insults, mocks, harms the reputation, prestige or statute of the state, its flag, its emblem, its symbols or any of its institutions, shall be punished for a minimum period of 10 years and a maximum of 25 years and face a fine of no less than AED 500,000.

Read related news coverage on the website of WAM.