In May 2013, the UAE initiated an ambitious journey to move from eGovernment to mGovernment within two years. A new government vision was announced following a meeting of the government officials. The target was set at 100 per cent to make priority services available online through two channels: websites and mobile phone applications.

In 2015, the UAE had achieved a remarkable rate of mobile governance. 96.3 per cent of the UAE government’s most used 337 services made the transition to mGovernment and mServices within 730 days and with the support of 41 government departments. The most important change that was taking place over those two years was the change of mentality and the culture of the government services’ management. Today, delivery of services no longer relies on physical offices and thousands of employees, but on advanced systems and innovative minds because of which, the rate of smart transformation increased dramatically as 98.18 per cent of the federal government services are available online.

The rate of adoption of eServices in the public administration increased in the last three years. It was a big challenge for the government to get the public to shift from using manual services to online services. All departments worked very hard to simplify the eServices so that everyone could use them easily. Government entities used different tools like marketing and gamification and offered round-the-clock customer support, which helped to increase the adoption rate. The UAE’s rank as per 2020 Digital Government Citizen Survey

Boston Consulting Group’s (BCG) '2020 Digital Government Citizen Survey’ covered 36 countries, 26 digital government services and almost 25,000 individual responses. As per the survey, the UAE ranked 3rd amongst all countries surveyed in the field of provision of digital services and subsequent adoption. The study showed that the governments of the countries of Gulf Cooperation Council (GCC), of which the UAE is a member, recorded approximately 30 per cent more adoption of digital services, than the global average.

In terms of frequency of access, 61 per cent of the UAE’s respondents revealed they use digital government services at least once per week. This is 14 per cent above the global average.

In terms of satisfaction with digital services, BCG’s study shows that the level in the UAE is high. The UAE scored 76 per cent, as compared to the average of developed countries which is 64 per cent and developing countries which is 58 per cent.

Other successes as per the survey

54 per cent of the GCC citizens, under the age of 25 are entirely comfortable with digital services in all areas.

Approximately 85 per cent of GCC residents live in urban areas and regularly use digital services.

GCC governments are emerging as global leaders in digitising their services, with a broad array of offerings, strong adoption and generally high levels of satisfaction.

The pandemic of COVID-19 highlighted the criticality of these digital government services, cementing their enduring status as a post-pandemic priority.

This case study about UAE Federal Government's Happiness Meter (PDF, 14.9 MB) shows how technology can successfully boost happiness. It highlights the customer and government services interaction, and the way that the innovative application is helping to address challenges arising due to lack of consistent data and real-time feedback. 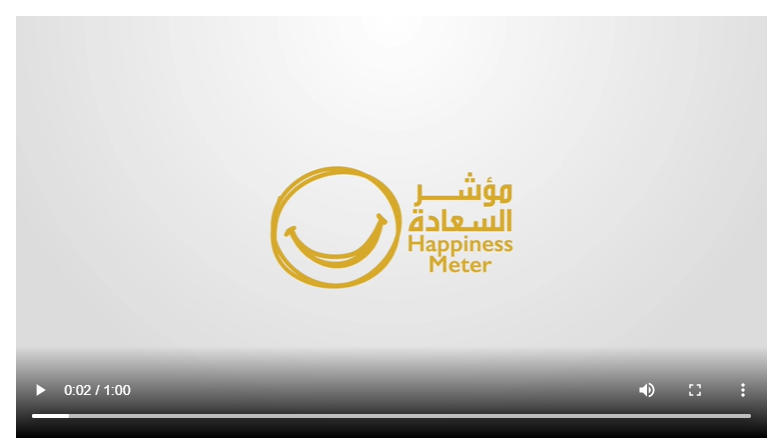 Read about user satisfaction with the Unified Digital Platform (UDP) in 2020.

TDRA launched the Federal Websites Guidelines (version 2020), which gives clear instructions and set valid rules for writing web content. According to that guideline, the website content has to be in two languages (Arabic and English), free of grammatical and spelling mistakes and properly segmented (that is no English text in the Arabic version and vice versa). The guidelines also cover domain and hosting, site architecture and design, user experience and usability, accessibility, eParticipation, social media and open data among others. Read the Summary of Web Content Guidelines for UAE Government Entities.

According to Federal Websites Guidelines, a government website should have a software to read texts and alternative texts for the visually impaired people. In addition, all audio and video files on the website should have descriptive captions to assist those with hearing problems. The TDRA website is one of the federal websites using such language to help the people of determination (special needs’ people) to browse its pages easily.

The National Policy for Empowering People of Determination (people with disability) aims to provide people of determination (people with special needs) with easy access to various information, depending on their individual abilities. According to the policy, entities are required to provide information about services to people of determination and their families in all the emirates, ensuring that all services are easily accessible. The entities are also required to make information accessible using modern technology to people who suffer visual and hearing disabilities.

The UAE’s Ministry of Community Development launched the ‘With Sign’ initiative under the theme ‘towards an open world with sign language’, targeting people of determination especially those who with hearing impairment, to help them communicate with community members through text interpretation with sign language. The text translation is performed by a smart 3D character on the entity’s website. The service enables the hearing impairment categories to ask questions through the website and record their messages through the computer’s camera to be translated.

According to TRA’s report for the second quarter of 2017 on the use of smartphones in the UAE, it is revealed that 81.5 per cent of phones registered on the UAE’s networks were smartphones.

Another aspect where ICT is applied is the eParticipation. The UAE national portal has a large section for eParticipation under the name (Sharik). Sharik provides several eParticipation channels which include consultations, forum, blogs, etc. In addition, each federal government entity has such eParticipation section, where users can participate in government decision and policy-making online.

The official portal of the UAE is also a handy resource for information about the UAE’s government, future, history, culture, economy, touristic sites or geography of the UAE and much more. Some of the other UAE government websites include:

Illiteracy is not an obstacle to internet use in the UAE, as it is less than 1 per cent. Emirati schools are increasingly being connected to the internet and equipped with eLearning facilities, and many of them encourage tablet computers for student use. The Mohammed Bin Rashid Smart Learning Programme was launched to establish a unique learning environment in schools through the introduction of 'smart’ classes.

The UAE is one of the world’s most connected countries. According to World Bank Data, internet penetration in the UAE was at 99.15 per cent in 2019.

There were 3,269,359 internet subscribers and 17,075,188 active mobile phone subscribers in the UAE as of March 2021, according to the Market Statistics report (PPT, 40.4 KB) published by the UAE’s Telecommunications and Digital Government Regulatory Authority (TRA).

The UAE is ranked 2nd globally for mobile speed and 27th globally for fixed broadband speed as of December 2020 according to Speedtest Global Index.

The UAE’s TRA launched the ‘Coverage’ initiative to perform a field scanning to test and analyse the quality of operators' networks all over the UAE and to simulate user experience. The coverage implementation mechanism is based on developing a smart and innovative system that is installed in a tailor-made car and indoor solutions that are constructed for field scanning. The aim of this initiative is to ensure consistent high-quality internet and mobile phone coverage all over the country.