AED 58.3 billion has been allocated for the year 2021. Find out details about budgets for the years from 2016.

AED 58.931 billion is the federal budget for 2022. The largest share of the 2022 budget has been allocated to the development and social benefits sector at 41.2 per cent, out of which the UAE will spend:

Meanwhile, 3.8 per cent of the budget has been allocated to the infrastructure and financial resources sector.

The budget for 2022 was announced as part of the country’s general budget for the next five years from 2022-2026, with a total value of AED 290 billion, the largest spending budget in the UAE’s history.

The UAE Cabinet approved the federal budget for the UAE for the fiscal year 2021. AED 58.3 billion have been allocated. The federal budget continues to focus on both social and economic development.

The budget aims to expand development plans and projects to raise the standard of living for Emiratis and residents. A large share of the 2021 budget will be allocated to social development including social welfare, health and education.  Read news coverage on WAM.

The UAE Cabinet approved a zero-deficit federal budget of AED 61.354 billion for the year 2020. This is the largest budget allocated since the establishment of the UAE. The budget is distributed amongst various sectors related to Emirati citizens and their services as follows: 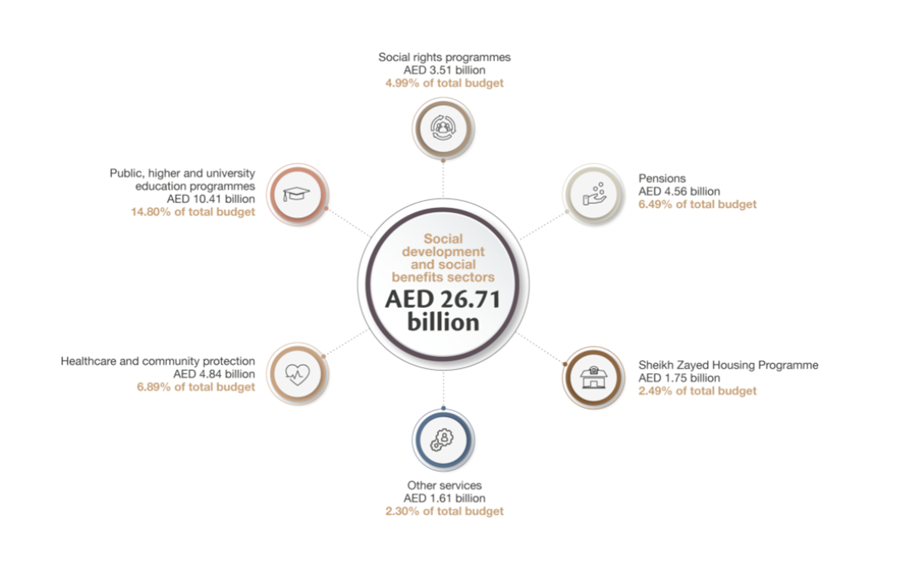 The budget amount was increased more than 300 times since the allocation of the first budget in 1971 and has been without deficit for the third consecutive year, thus, reflecting the strength of the national economy and the country’s abundant financial resources that can fund economic development projects.

The 2019 budget was approved at a total value of AED 60.3 billion, allocated to various sectors with a focus on those directly linked to citizens’ well-being, health and education. The budget includes

The federal budget allocated for 2018 was AED 51.4 billion, with increase of 5.6 per cent from that of 2017. The federal budget for fiscal year 2018 was allocated to the key sectors for the UAE, with the budget for Social Development and Social Benefits standing at AED 26.3 billion, equating to 43.5 per cent of the total budget. The UAE Government was allocated a total of AED 22.1 billion amounting to 36.5 per cent of the total budget.

In late October 2016, the UAE Cabinet approved the federal budget draft submitted by Ministry of Finance for the fiscal year 2017, with a total spending of AED 48.7 billion as part of the five-year budget cycle 2017-2021.

The UAE Cabinet approved the budget of the UAE for the fiscal year 2016 with a value of AED 48.557 billion with a zero deficit. The budget was in line with the initiatives and projects adopted in the Federal Government strategy and prepared in accordance with the principles of a zero-based budget.

Read more about the federal budget distribution and expenditure in different sectors.