The UAE's response to climate change

In order to control the effects of climate change, the UAE is controlling emissions, reducing flaring of natural gas, increasing energy efficiency and undertaking many other steps. Read about them on this page.

The UAE Net Zero by 2050 strategic initiative is a national drive to achieve net-zero emissions by 2050, making the Emirates the first Middle East and North Africa (MENA) nation to do so.

The initiative aligns with the Principles of the 50 - the UAE’s roadmap for accelerating national economic development to mark the country’s golden jubilee year, as the nation enters a new 50-year cycle of growth. The major economic opportunities offered by the path to net zero directly support a vision to develop the Emirates into the most dynamic economy in the world.

The UAE Net Zero 2050 strategic initiative aligns with the Paris Agreement, which calls on countries to prepare long-term strategies to reduce greenhouse gas (GHG) emissions and limit the rise in global temperature to 1.5 C compared to pre-industrial levels.

The Ministry of Climate Change and Environment (MOCCAE) will lead and coordinate efforts to execute the UAE Net Zero by 2050 strategic initiative and ensure collaboration at national level to fulfil this objective. Stakeholders in key sectors, such as energy, economy, industry, infrastructure, transport, waste, agriculture, and the environment, will update relevant plans, strategies, and policies, and implement initiatives and projects to achieve net zero by 2050 in line with their needs and growth requirements.

Federal and local government authorities will be responsible for preparing comprehensive studies and developing plans that introduce the measures necessary to reduce emissions while also ensuring economic growth based on principles of sustainability.

The deployment and use of clean energy solutions is one of the main pillars of the UAE’s model of addressing the challenge of climate change and reducing GHG emissions. The country began financing clean energy projects more than 15 years ago, and has invested over 40 billion USD in the sector to date. Current trends predict the production capacity of clean energy, including solar and nuclear, to reach 14 GW by 2030, up from about 100 MW in 2015 and 2.4 GW in 2020.

The UAE’s history of climate action

The UAE Net Zero by 2050 strategic initiative builds on the country’s three decades of climate efforts and represents a strategic target for the next three decades. 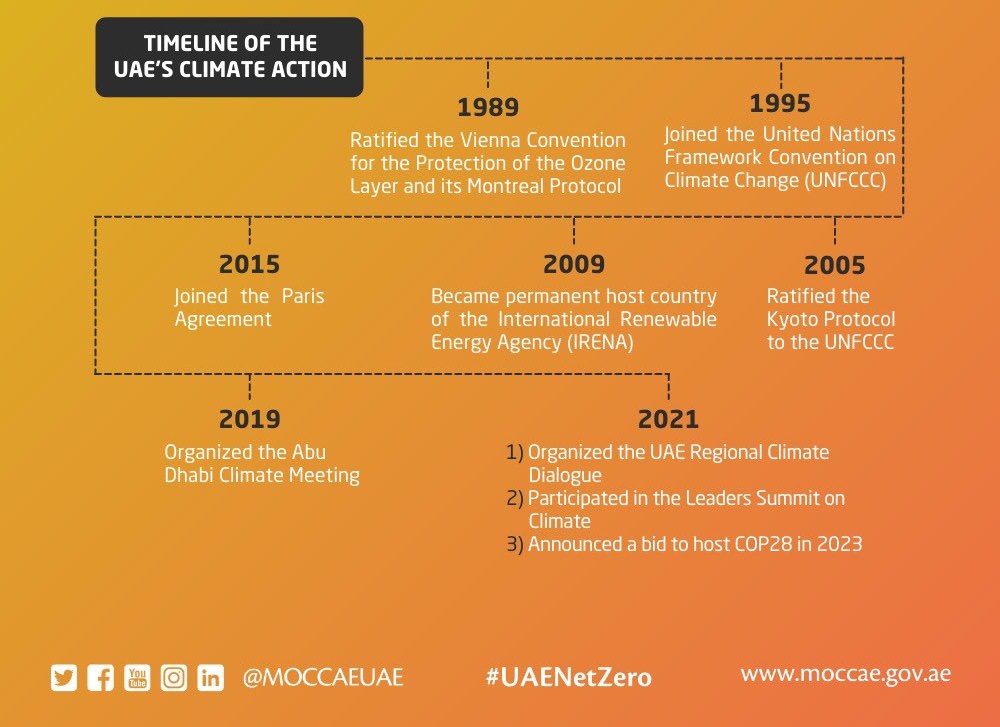 What is net zero?

The UAE’s Hydrogen Leadership Roadmap is a comprehensive national blueprint to support domestic, low-carbon industries, contribute to the UAE’s net-zero strategy and establish the country as a competitive exporter of hydrogen.

Vision 2021 is targeting at a sustainable environment and infrastructure by 2021. The UAE has set KPIs to measure its targets and also launched initiatives and plans to achieve the same. The National Climate Change Plan of the UAE 2017–2050 (PDF) serves as a roadmap to bolster nationwide actions for climate mitigation. Read more on Environment and government agenda. This way, the UAE has integrated climate change measures into national policies, strategies and planning.

The United Arab Emirates has engaged in the implementation of 14 projects for the purpose of reducing the emissions of Greenhouse Gases (GHGs) under the umbrella of Clean Development Mechanism (CDM) projects. The prospective total annual reduction of these projects estimated about one million tonnes of carbon dioxide equivalent (CO2Eq).

With investment in renewable energy and the role as the host of the International Renewable Energy Agency (IRENA), UAE is at the heart of the clean energy revolution.

In 2005, the UAE ratified the Kyoto Protocol to the UN Convention on Climate Change, becoming one of the first major oil-producing countries to do so.

In accordance with the United Nations Framework Convention on Climate Change (UNFCC), the UAE is a non-Annex 1 country and not obligated to reduce its emissions. The UAE, however, has chosen to implement actions to slash its carbon emissions, including monitoring and tracking GHG emissions and assessing policies related to them.

In addition, the UAE is committed to expanding the role of low-carbon technologies in the economy and investing in renewable energy and nuclear power.

At the COP21 United Nations Climate Change Conference in December 2015, the UAE affirmed its plan to generate 24 percent of its electricity from clean energy sources by 2021.

In 2014, the UAE and the US launched the first annual bilateral energy dialogue to facilitate new and ongoing initiatives to strengthen cooperation between the two countries and to enhance and secure the global energy market.

In May 2014, the UAE hosted the Abu Dhabi Ascent to bring together individuals from government, the private sector and civil society to create momentum for serious discussion and action on climate change.

In order to reduce its carbon footprint, the UAE monitors the emission of gases that lead to the greenhouse effect and has reduced its per capita carbon emissions. Due to better technology and transition to more natural gas in power plants, emissions of carbon dioxide (CO2) per capita have decreased.

To encounter the critical effects of climate change on the natural environmental ecosystems as well as the water surfaces, the UAE's Ministry of Climate Change and Environment has undertaken a technology of cultivation without soil in several agricultural projects.

This technology helps to control the internal domestic climate (temperature, humidity and ventilation), roots environment (select of the adequate media and provide it with feeders). This technology increases the efficiency of water consumption, use of fertilizers, solutions for soil problems and type of soil.

The UAE is also committed to reducing emissions from flaring, which involves burning off waste gas or oil during petroleum testing or production. Abu Dhabi National Oil Company (ADNOC) has zero-flaring as a strategic objective. From 1995 to 2010, ADNOC reduced gas flaring by up to 78 percent.

Due to this significant scientific discovery of the ozone depletion, many countries have called for organising an agreement for the protection of the ozone layer in 1985 in Vienna.

Vienna Convention for the Protection of the Ozone Layer aims to:

The UAE has always been an active party in the efforts exerted by the international community to phase out the ozone depleting substances. The UAE acceded to the Vienna Convention for the Protection of the Ozone Layer and the Montreal Protocol on Substances That Deplete the Ozone Layer in 1989. In addition, it adopted the four amendments of the Montreal Protocol. It has been since then exerting enormous efforts to meet its obligations under the convention and the protocol.

The strategy lays out steps toward optimising energy, smarter transport and recreational areas. Demand-side management of electricity will play a role, as will increased public transportation.

In 2010, the UAE Cabinet approved the Green Building and Sustainable Building standards to be applied across the country. Application of these standards started at government buildings early 2011. The project is expected to save AED 10 billion by 2030 and reduce around 30 per cent of carbon emissions.

In 2011, Dubai Government issued a set of 'Green Building Regulations' for private sector construction in order to reduce energy and resource consumption as well as improve public health and general welfare. The code is mandatory for all new buildings.

In 2019, Ras Al Khaimah, launched Barjeel, the Green Building Regulations that sets minimum sustainability standards for new buildings. Buildings permitted under Barjeel are expected to consume 30% less energy and water as compared to a typical building in Ras Al Khaimah. Barjeel became mandatory for all new buildings from January 2020.

The UAE's largest emirate, Abu Dhabi, has committed more than USD 15 billion to renewable energy programmes through the Masdar Initiative. Masdar underscores twin commitments to the global environment and diversification of the UAE's economy.

Masdar focuses on the development and commercialisation of technologies in renewable energy, energy efficiency, carbon management and monetisation, water usage and desalination.

The UAE is the first Gulf country to start on the new energy strategy, which involves the nuclear power and solar energy in addition to natural gas, which covers the majority of the UAE's needs.

Read about UAE's efforts to produce clean and renewable energy.

Transportation is one of the fastest-growing sources of emissions worldwide. The UAE is investing in new mass transit systems such as Dubai's light rail system and a proposed high-speed train.

For more information, refer to transportation.

Carbon capture and storage (CCS) is a means of mitigating climate change by capturing carbon dioxide (CO2) from large point sources such as power plants and storing it safely underground instead of releasing it into the atmosphere.

The potential impact of CCS is huge. The Intergovernmental Panel on climate change expects that CCS could contribute between 10 and 55 per cent of the cumulative worldwide carbon mitigation effort over the next 90 years.

The UAE is developing a major CCS project in Abu Dhabi, which is managed by Al Reyadah: Abu Dhabi Carbon Capture Company. It is the first in a planned series of CCUS projects in the emirate of Abu Dhabi. The source of CO2 for this Project is an off stream from Emirates Steel Industries (ESI) factory in Mussafah, UAE.