In 2014, Ministry of Health and Prevention -MoHaP declared the launch of its first robot to conduct catheterisation and cardiac surgeries, all through computerised systems. The system was installed in Al Qasimi Hopsital to start the first surgery in June 2014.

In 2018, MoHaP provided Al Qasimi Hospital with a new robotic device to conduct complicated catheterisation and cardiac surgeries. Its benefits include 99.1 per cent clinical success in complex cases, 95 per cent reduction in radiation exposure to the primary operator in addition to speed and accuracy in fixing the stent.

Robotic Surgeries in Obstetrics and Gynaecology

In April 2019, MoHaP launched the Robotic Surgeries Programme in Gynaecology and Obstetrics. The launch comes in the wake of the successful use of the robot in heart surgeries, due to its capability of accessing the most complicated parts in the human body, besides its high accuracy because of the firmness of the robotic arm during the surgery.

In the same year, Dubai Health Authority launched its first robot to dispense medicine in Rashid Hospital without any human interference. Based on very high technology, the robot can store up to 35,000 medicines and dispense around 12 prescriptions in less than one minute, using barcodes of each medicine.

The Medopad app from Ministry of Health and Prevention tracks the most important daily activities of patients, monitors patient’s vital signs remotely and helps the medical care teams to provide better care by remotely documenting, analysing and reviewing their data and information. The app uses artificial intelligence (AI) technologies to predict or detect life-threatening medical conditions. It has several educational and awareness content to assist patients under pre and post-operative care and those with cancer, multiple sclerosis, kidney and heart diseases, chronic obstructive pulmonary disease (COPD), Parkinson’s and others diseases.

In May 2017, Dubai Police employed the world’s first operational robot policeman, who officially joined the line of duty and greeted guests at the opening of the 4th Gulf Information Security Expo and Conference (GISEC).

The autonomous Robocop stands 170 centimetres tall and weighs 100 kilograms. It is equipped with an emotion detector which can recognise gestures and hand signals from up to 1.5 metres away. The Robocop can also detect a person's emotions and facial expressions – whether the individual is happy, sad, or smiling - and has the ability to change his expression and greetings accordingly to put people at ease. RoboCop can also transmit and communicate in six languages including Arabic and English. Additionally, the robot can chat and interact, respond to public queries, shake hands and offer a military salute.

A robot to save lives on Dubai beaches

Dubai Municipality uses robots to help save lives on the beaches of Dubai. The new addition is the most state-of-art technology used in the safety system of the municipality. The robots are designed to withstand the worst climatic conditions. They can be used in the event of high waves or heavy ocean currents that are difficult for human lifeguards to conduct rescue operations. One robot is capable of saving four to five people at the same time.

In November 2014, Federal Authority for Identity, Citizenship, Customs and Port  Security -ICP launched the robot Hamad to serve customers in its happiness centers all over the country. The robot Hamad provides many services, like receiving ID renewal applications, identifying ID card status, and updating personal information of customers. 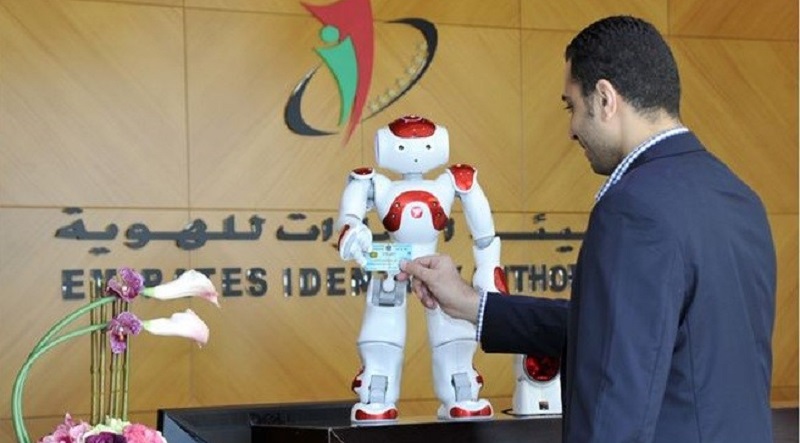 Roads and Transport Authority (RTA) in Dubai integrated a robot-operated vehicle registration plate maker in Dubai. The fully-automated machine can produce 33,000 plates per day. A robot receives electronic printing orders via the e-Licensing System and begins to print registration plates without any human intervention.

RTA uses robots also to clean Dubai Metro stations. The purpose of using the robotic cleaner is to reduce consumption of water required for traditional cleaning and provide deliberate sterilisation.

Online advisor for living in Dubai

Digital Dubai Authority launched the Rashid chatbot, which uses artificial intelligence to offer official and reliable answers to customers’ questions regarding the necessary procedures, documents, and requirements to conduct various transactions. This is the result of the partnership between several government departments.

The UAE’s Ministry of Education launched a series of artificial intelligence and robotics contests for students of grades 1 to 12. The contest aims to prepare a generation of UAE thinkers, researchers and innovators and build capacity of national cadres for future sustainable knowledge-based economy.

The Mohamed Bin Zayed International Robotics Challenge (MBZIRC) is an international robotics competition held in Abu Dhabi every two years. The competition draws participation from universities, research centres, companies and individual innovators from all over the world to develop real-world solutions to some of the pressing global challenges through the application of autonomous robotic technology.